The history of the Tristle Glen neighborhood 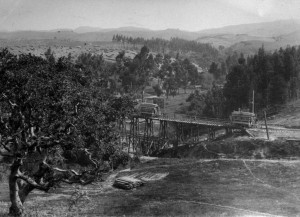 Trestle Glen is named after a rail trestle built in 1893 by Borax Smith, which was dismantled in 1906 when the line was rerouted. The new rail line ran along Trestle Glen Creek. Early settlers had originally called the creek Indian Gulch after the Huchiun village that was located near the present-day intersection of Lakeshore and Trestle Glen Road. Indian Gulch later served as a border between Vicente Peralta and Antonio Maria Peralta lands. Later, the creek served as part of the border of Brooklyn Township. The creek is now mostly underground.

After the Peraltas, the land belonged to the Sather family. Jane Sather of UC Berkeley’s Sather Gate allowed it to be used as park land. In the 1900s neighbors worked to keep the area as parkland and Mayor Frank K Mott was involved in a plan to keep Trestle glen as part of a greenbelt connecting Dimond Canyon, Mountain View Cemetery and Lakeside Park. Mayor John L Davie wasn’t into the plan, though, and the area was developed in 1916.

The streetcar was instrumental in spurring the development of residential neighborhoods in the area. Trestle Glen was largely developed by Wickham Havens and Walter Leimert in the 1920s. The developments included racial covenants that served to exclude minorities.1

Today, many of the residents belong to the Lakeshore Homes Association, the second oldest homeowners association west of the Mississippi River.